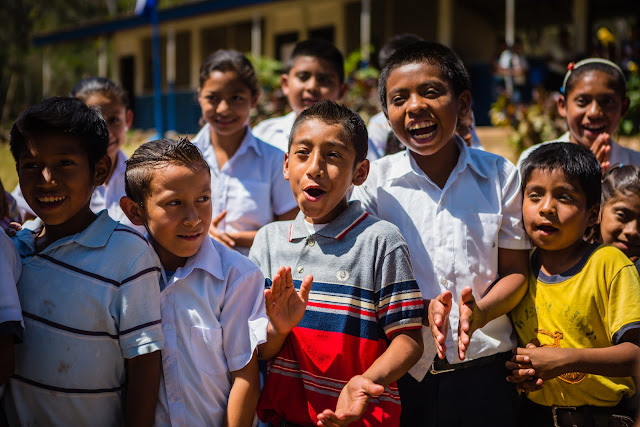 Our first day here in Nicaragua was a great way to kick off our missions trip. It started with breakfast at 7 am, and at 7:30 am we were off. We were on the bus on our way to a school and church plant. There were about 180 kids that came to listen and see what we had to say.

It was our first program of our trip and we were ready for God to use us. We danced, we sang, and we were crazy.

Kelli and Simon shared their testimonies and David had the sermon of Zacheus. Matt was the tree and I was Zacheus. Ha ha. Afterwards, we had face paint and animal balloons and were mobbed by children. I have learned the word for sword, dog and hat in spanish very well.

For lunch we had chicken, plantains and rice.

Next we went to a park in Managua. This was pure street evangelism to the kids and those surrounding. We were doing the same program as the service before with the kids, but only not in a Christian environment. It was really cool to see the kids dance and sing with us to "Jesus is my Superhero" because they participated more than the last group. And this time we changed the program to where two kids were Zacheus and the tree, to get them involved.

When it was time to hand out animal gallons, it was so hard to control the children. But it showed how a simple balloon twisted into a crazy shape can make a child's day.

Lastly, we went to a youth service at Hosanna Central which is the main church for several other churches in the area. The church was beautiful. It actually stuck out more than the other places we had been. It was nicer and bigger than our Flower Chapel at school.

The service was amazing. We did two dramas, "Get Back Up" and "Set Me Free", and I did a solo dance, that God helped me put together that afternoon. Brittany, Cali and Tyler gave their testimonies, while Simon preached on Gideon and how we should define ourselves by what God says and not what the world says.

It was so cool to worship with them because they were some songs that we knew in English, so it was cool to learn them in Spanish. I am definitely downloading some Spanish worship music when I get back home.

Of all the things to have for dinner in Nicaragua, we had McDonalds. But it was cool to see the portion differences from the States and Nicaragua.

I would ask you to pray for the children of Nicaragua. After spending the day (which felt like three) with children and youth, it showed me how much they need to be loved. By sharing Jesus all day with them, I pray that we made a long lasting impact on their lives.

P.S. The best fruit juice to be made in the world is found in Nicaragua and is held in bags.

- Macy Poore
Posted by Nicaragua Missions Team at 5:41 AM