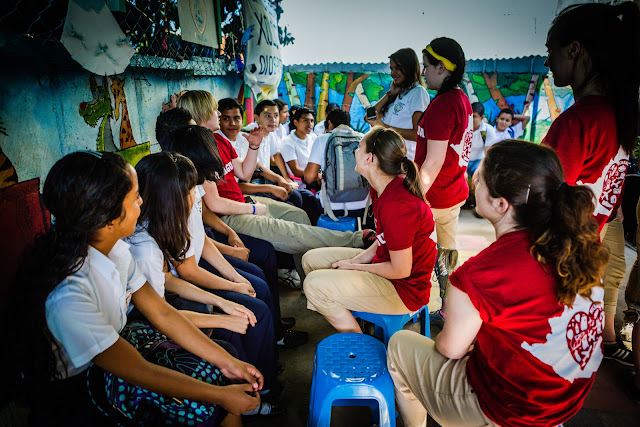 Today we started off with a school assembly at 7:00AM. The assemblies are completely different here than they are in America where we have meetings in an auditorium. We meet outside in the courtyard of the school. This assembly was for high school students. The teenagers here are similar to the ones in America where the pressure from their peers is strong and response from them is similar to American teenagers. We did our normal routine and several kids gave their lives to Jesus this morning before school began for them!

After the assembly we went to the campground and had breakfast with the team. We left for the next school which originally was supposed to be one assembly but due to age differences and number of kids we split it with elementary students and high school students. Both assemblies went over very well and God moved in both. We had some mishaps with the second assembly with a random dance-off which the high school students took a little too far…the situation was handled which was good and the missionary was invited to come back again with other teams in the future!

After that next service we went to a local Bible College called Universidad Martin Lutero (University of Martin Luther). This was fun. I was stretched at this time because they wanted somebody to play the piano and I was the only person who knew how to play on our team. Traveling for the school I was used to having high-end equipment and here I was playing on something that I was not used to and without a sustain pedal on the piano. That made things difficult. I played songs by my ear and listening to the man leading. The keys kept changing, the songs were outdated but God still stretched me and moved in that room! Simon preached as well this morning and God definitely used him.

We had lunch after the service with the Bible Students. It was really good steak with plantains and rice and beans. We pretty much have had rice and beans with every meal. I’m getting used to having it so often now and it will probably we weird to not have it so frequently soon.

At 2:00 we had a service at a military high school. The kids there were the most respectful and probably my favorite group of high school kids. They received our message and several of them gave their lives to Christ. Afterwards we hung out with them and got to know them for a while which was awesome! Another cool thing is that soda here is significantly cheaper! For two bottles of Fresca it cost 40 cents a piece in US dollars. This outreach was fun and these kids were so loving.

Tonight’s service I was given the opportunity to preach to a congregation of about 200 people. Our team did our normal outreach dramas and testimonies. I preached the same sermon I spoke the other night in the mountains. They received the message and one woman even gave her life to Jesus! It was awesome! God is so good!

After prayer the church transitioned to the most memorable communion service I have ever been a part of. Everybody came up front with his or her communion to the altar. We prayed and ate communion together. Immediately following we all began to worship with each other. It was beyond powerful and God was moving so evidently tonight in that service! I will never forget it. It’s so hard to believe how little emphasis we put on communion in America compared to Central America. It was entirely humbling.

Thank you for all of your prayers!

- David Brock
Posted by Nicaragua Missions Team at 6:13 AM